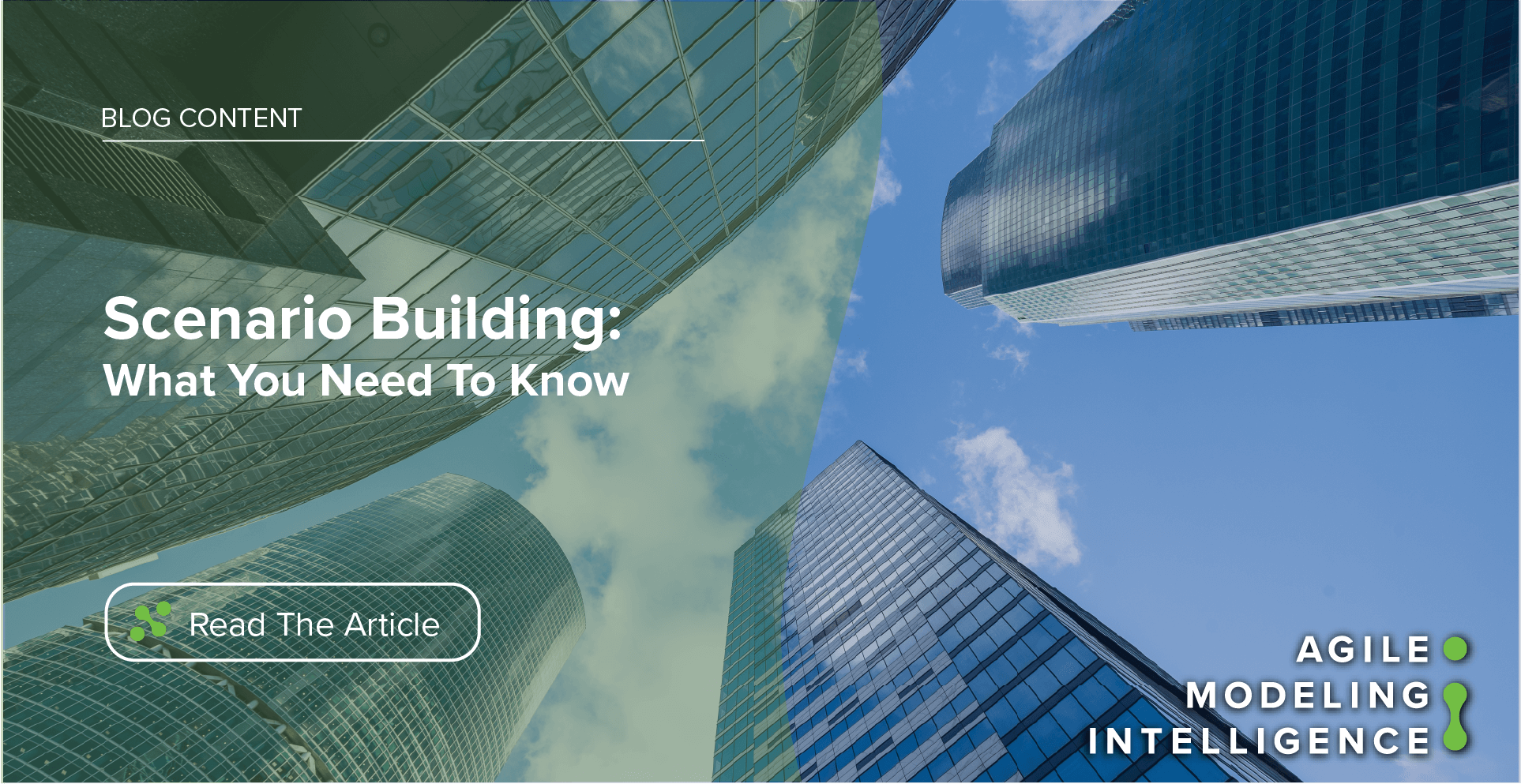 Scenario Building: What You Need to Know

The concept of “analysis paralysis” is all too familiar to any of us who’ve had to make critical decisions.

Like staring up at a starry night sky, the number of possibilities—both choices and outcomes—can seem limitless. We can end up feeling very small. Having too many choices can hinder rather than empower us, leaving us pigeonholed into making rash decisions.

It’s not enough to rely on “gut feeling” when making key organizational decisions because it can lead to catastrophic outcomes. So, how do analysts and decision-makers make better choices?

Scenario building is a process for exploring the future that solves this problem. An inherently collaborative, conversational process, collaboratively building and analyzing different scenarios can drive consensus.

What is Scenario Building?

Scenarios can be thought of as plausible alternate futures. They illustrate what things will look like if certain factors are influenced by particular assumptions. A strong scenario identifies significant events and internal and external drivers to determine how these factors may come together to form a particular future.

Scenario building is a form of storytelling—crafting narratives about what different futures may hold. Pioneered as a business strategy by Royal Dutch/Shell in the 1970s, this process involves the study and development of potential future outcomes (sometimes called “Shell scenarios”).

In business, scenario building uses our understanding and analysis of current and historical trends and key industry drivers to craft realistic predictions for what the future holds. It uncovers blind spots, discovers opportunities, and challenges myopic assumptions by drawing from many different data sources to expand our thinking.

There is never just a single outcome for an important decision, which is why analysts build sets of scenarios to explore all the possibilities.

Scenario building can be used to uncover which aspects of the future decision-makers should be most concerned with, to explore the ways in which scenarios may change over time, and to identify the best possible pathways to a successful, sustainable future.

Scenarios should be plausible and exploratory

One of the biggest advantages of scenario building is that it provides us with heightened self-awareness—it lets us objectively consider possible futures without much human bias.

The key to understanding scenario building is to note that it is not a way to predict the future. Instead, it’s a way to have productive conversations about plausible futures so that decision-makers can achieve consensus. Scenario building describes multiple scenarios and how they may each evolve, but it does not tell decision-makers which choice to make.

The Shell method of scenario building, for instance, was developed as a response to the company’s dissatisfaction with its “official” views of the future. They felt that the “business-as-usual” perspectives they’d taken were far too optimistic.

What’s more, business perspectives are deeply rooted in our tendency, as humans, to focus on familiar patterns. In doing so, decision-makers narrowly focus on subjective expectations, blinding them to the unexpected.

For this reason, Shell scenarios emphasize plausibility. The goal is to paint pictures of the future that make leaders challenge their assumptions about how the world works. What happens—or whether it will happen—is not as important as the clarity, objectivity, and plausibility of each scenario. 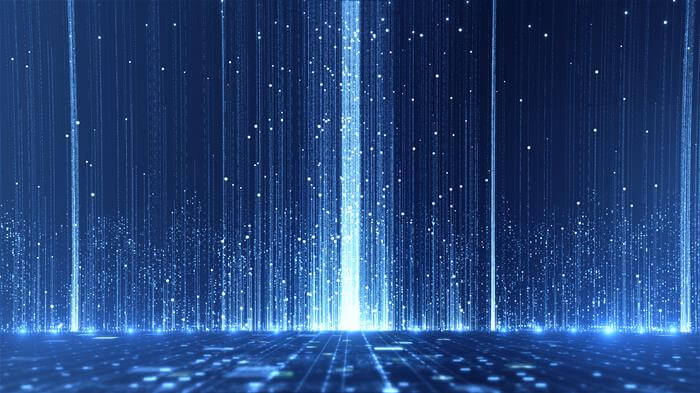 Why is Scenario Building So Essential?

At its simplest, scenario building is intended to foster strategic conversations. It provides individuals with a way to consider and discuss current events, risks, and opportunities. It creates a common ground for exploring the unknown and playing an active role in making more informed decisions.

There is no one “right” way to go about scenario building, but there are eight critical steps that help most companies start asking the right questions.

This popular approach to scenario building results in a four-quadrant chart that considers how particular variables and assumptions might impact outcomes. 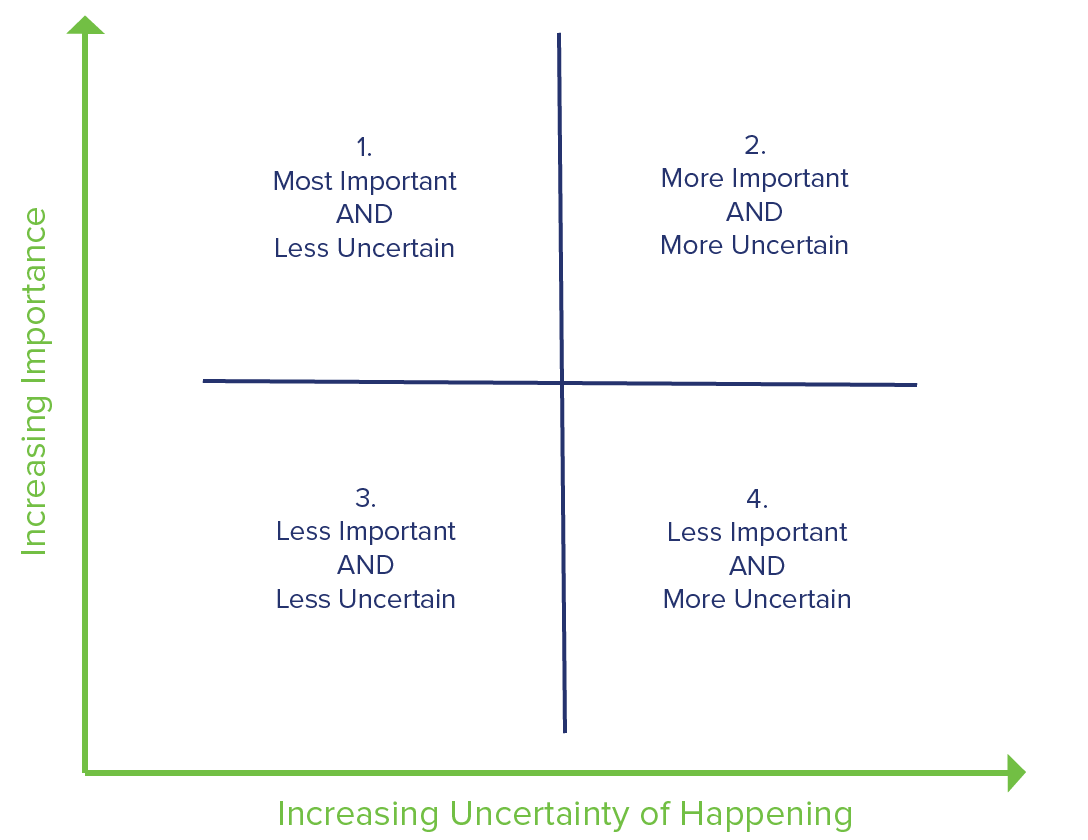 Similar to a hypothesis, the first step is to identify the potential futures that an organization should consider. A private university, for example, may focus on the implication of four different approaches to mitigating losses during the COVID-19 pandemic.

These forces represent key input and output variables and market trends that influence outcomes. These may be demographic, economic, cultural, sociopolitical, or legislative factors.

Inputs and outputs should be ranked according to their uncertainty as well as their importance to the decision-making process. This step helps analysts narrow scenarios into a shortlist of worst-case, best-case, base-case, and surprise scenarios.

Investigating the relationships between variables and different scenarios results in the creation of alternative quadrants, or frames, that represent divergent but plausible scenarios.

If your organization was considering the geopolitical climate, for example, one end of an axis on the resulting chart may be “globalization,” while its other end could be “regionalization.”

By this stage, the shortlist of most important scenarios and their potential outcomes should be fully described. For instance, one scenario may involve exploring how a more liberal, globalized economy may impact your organization—and how you might respond to it.

Next, a set of chosen key metrics are used to assess changes in each scenario. In other words, you’ll decide how to measure whether the economy is moving more toward a particular end of one axis or another.

For the globalization/regionalization axis, for example, this may mean tracking trade deficit numbers between G20 countries.

Using the key metrics that you have selected, assess how your decision will be impacted under each of the four major scenarios. You may have to consider even more factors and variables than you initially anticipated—not just those determined in step 2.

One of the main objectives of scenario building is to allow for strategic decision-making in the face of risks and rewards. After each of the four scenarios has been described and analyzed, leadership can evaluate the viability of alternative approaches and contingency plans.

Take the Guesswork Out of Decision-making

It’s not enough to simply make predictions about the future. If you want to make the most well-informed decisions, you need to take all possibilities into account. But grappling with the future can be like piloting through turbulence while building the airplane at the same time.

Scenario building prepares your business to react to any scenario using a reliable, flexible analytical framework. But you can’t build plausible scenarios without the right tools.

At Synario, we’ve developed an elegant, out-of-the-box solution for scenario planning and development. Our multidimensional modeling solution lets you see and test multiple scenarios at once. See the impacts of every possible change to your inputs in real-time, all within a single dynamic financial model.

Even better, Scenario’s automated Presentation mode turns your insights into accessible visualizations with the click of a button. Re-run the numbers mid-presentation, if you need to. And watch as your board starts nodding their heads.

Explore the Future With Confidence